Still a lot of people seem to think that sufficient fatigue life can be reached just by doing a static analysis. Hey, my structure can carry a tremendous amount of load, so why should it fail due to some small loads. Well, it does fail quite often due to small loads. Look to this survey on root causes of structural failures. 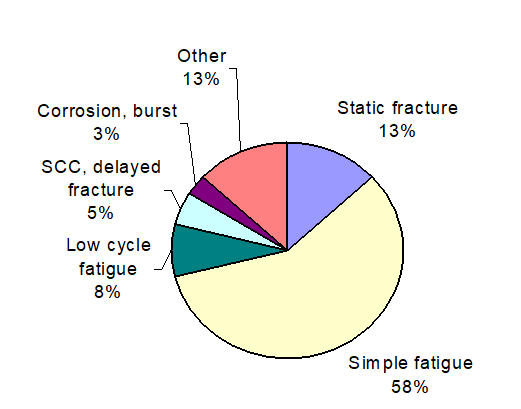 You see, not many static failures. So apparently fatigue (actually, durability in general) is a much larger problem than static overload. If we could cover fatigue by static analysis, why are there so many structural failures due to fatigue?

This is a clear statement. There are many reasons why we cannot cover fatigue with static analysis.

The main reason is that fatigue has a totally different failure mechanism than static overload. Static overload depends on core material properties whereas fatigue depends on surface properties. Moreover, it also means that methods to obtain static strength cannot be automatically applied to fatigue. Read about it in my blog article Principal Stresses vs. Equivalent Stresses in Fatigue.

Other reasons have in general to with loads, detail design and/or environment (see also What is Fatigue?). These aspects determine whether static overload or fatigue (or any other failure mechanism) will be the critical one. Obviously, it is still possible that the static properties of a structure are more critical than the fatigue properties, but that does not mean that fatigue is covered by static analysis, fatigue is just less critical.

To know what will be critical you will have to do both the static and the fatigue analysis. If you are really experienced you might consider skipping some analyses based on engineering judgement. However, be sure that such a decision is based on valid arguments.