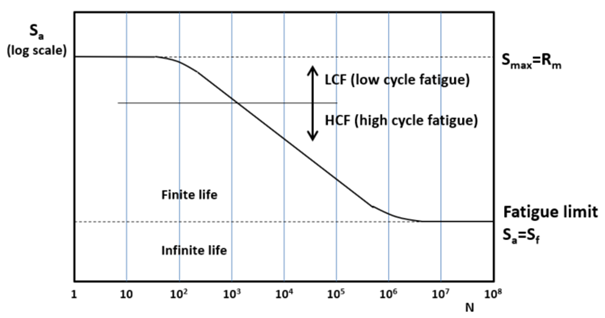 It is sometimes even thought that small cycles can be neglected, resulting in a small number of large cycles, which situation then erroneously is interpreted as LCF. Note that LCF corresponds with cyclic plastic deformations, not with small number of occurrences of large (elastic) cycles.

In some stress spectra a peak stress may incidentally exceed the yield limit. Does that make the fatigue process LCF? As long as the cycles are dominated by elastic strains, the fatigue mechanism will be typical for the HCF process. An incidental cycle with increased contribution of plastic strain does not change this.

If stresses close to a notch exceed the yield limit, some local plastic deformation will occur. Subsequent elastic unloading leads to an inhomogeneous stress distribution. At the edge of the notch there will be compressive stresses, which are in fact favourable for fatigue.

Since the mechanisms are so different, different methods should be used for fatigue life estimation for HCF (using S-N data) and LCF (using e-N data). However, despite of the difference, it happens often that LCF methods are used for HCF analysis using local stresses (or strains). In a previous blog post (Fatigue Analysis using Local Stresses) and in the free eBook Common Mistakes in Fatigue Analysis it is explained why this approach is not correct.