The common approach for fatigue life analysis is using S-N curves based on nominal stresses (i.e. average stresses in the net section). Depending on the severity of the stress concentration (Kt) in the structure, a S-N curve is then selected that corresponds with the actual structure. In the diagram below a few S-N curves are shown for different Kt values. The larger the Kt, the lower the fatigue limit and the steeper the S-N curve (smaller value of k in the S-N curve equation (Sa^k)*N=c). 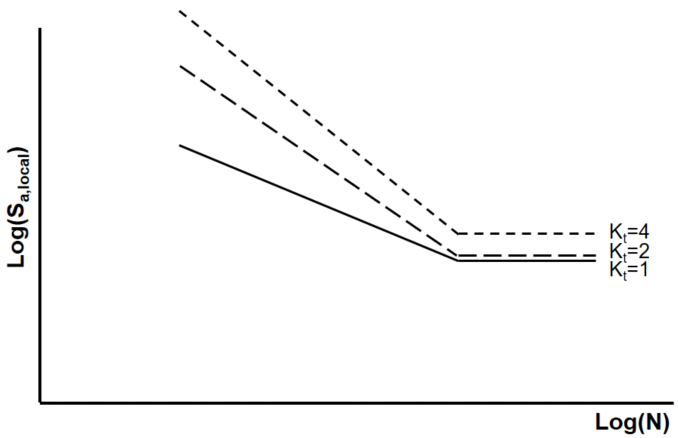 This condition however gives a problem. The attraction of using local stresses in the fatigue analysis is based on not knowing the Kt. The actual problem is the fact that a local stress can be any combination of nominal stress and Kt, each giving a different result in a fatigue analysis. Just knowing the local stress is unfortunately insufficient input for the fatigue analysis.
The S-N curves based on local stresses show different fatigue limits and different gradients for different Kt values. The difference in fatigue limit can be accounted for by making corrections for notch sensitivity. But such a correction is not possible for the gradient. When looking into the S-N curves, the gradients for Kt=2 and Kt=4 may look at first sight not so different, the S-N curves however are plotted on log-log scale. Using the wrong Kt (i.e. wrong gradient) in the analysis may lead to significant errors in the outcome.

Many codes and FE fatigue tools use a fixed gradient with k=5 in de equation (Sa^k)*N=c. This is oversimplified. The value of k depends on the stress concentration, but also on the stress ratio of the stress cycle as will be discussed in part 2 of this blogpost.