Fatigue properties of materials are often described using the fatigue limit or the S-N curve (fatigue curve, Wöhler curve). The S-N curve describes the relation between cyclic stress amplitude and number of cycles to failure. The figure below shows a typical S-N curve. On the horizontal axis the number of cycles to failure is given on logarithmic scale. On the vertical axis (either linear or logarithmic) the stress amplitude (sometimes the maximum stress) of the cycle is given.
S-N curves are derived from fatigue tests. Tests are performed by applying a cyclic stress with constant amplitude (CA) on specimens until failure of the specimen. In some cases the test is stopped after a very large number of cycles (N>10^6). The results is then interpreted as infinite life.
Fatigue curves are often given for Kt=1 (unnotched specimens). Those curves describe the fatigue properties of a material. Actual structures are better described with S-N curves for Kt>1 (notched specimens). 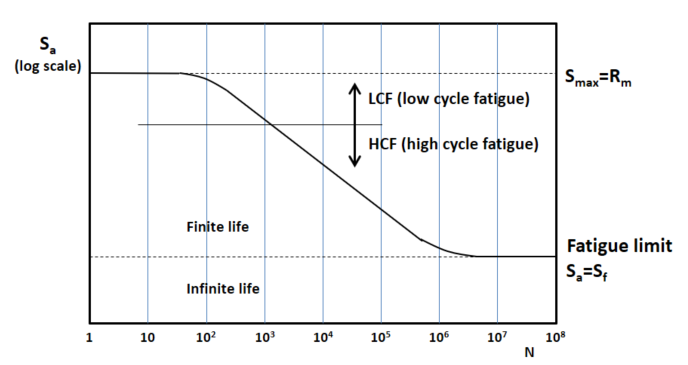 The S-N curve above has some characteristic features which are discussed in our free ebook.